How can we help you today?

Our games are usually very stable on NOOK devices, but sometimes a problem can occur which causes a game to no longer run.  This could be because of a bug in the game itself (we do our best to find and fix those!) or a problem with the device.

The first thing to try is to Check for Updates because if there has been a bug affecting many people we will likely already know about it and have provided an updated version.

This article will go through the steps we usually suggest to get things working, along with some pictures to help you find the various options if necessary!

If the game isn't running, here are the basic steps to try.  If you reach a step where the game is running again, then great! you don't need to go any further!

Usually one of these steps will resolve the problem. If you've had to remove the data at any point then you might need to do a Restore Purchases from within the game's store if you have any purchases you want to bring back.

This article will help to explain each of these steps!

This often fixes the problem without you having to do anything more! Just tap on the game icon as usual.

If it works and goes right into the game, that's all you need to do!

If not... continue on to the next step.

If one of our games has stopped running, then the usual loading screen will pop up a warning next time you try to run the app. Here is the usual message it might show, we're using Astraware Wordsearch Deluxe as the example here, but it might be a different app for you: 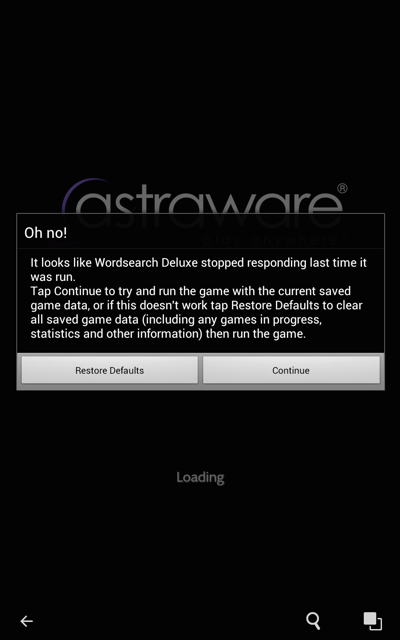 From here your choice is either to Continue - which means it will just attempt to run again, or to Restore Defaults which means that it will attempt to correct the problem by removing any saved information.

To begin with try the Continue option, which is the safest of all. It won't delete any data, and usually will be enough for the game to run again.  Even if it might have lost part of the settings, the game can usually recover and pick up restoring as much as possible.   It is likely that any game in progress might be lost, but you'll be able to start a new one.

It could be that the game is still running in the background, and that the Android operating system (which is what the NOOK uses) won't let you re-run the game again until the old one closes properly.  This should be automatic, but rarely it doesn't work, so the next thing to try is to tell the system to stop the game from running.

Find the Settings app on your Nook, it looks like this: 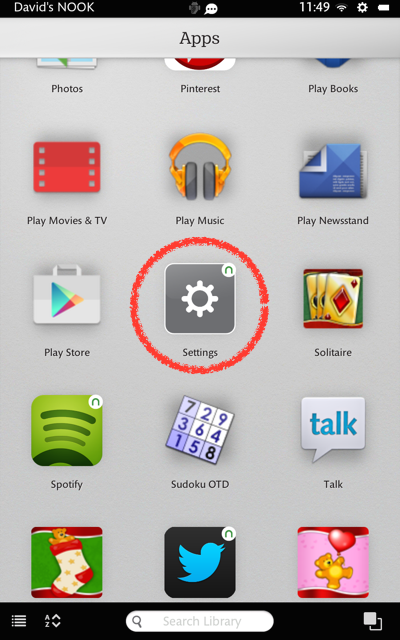 Tap that to open the Settings app, which gives you a new screen that looks like this: 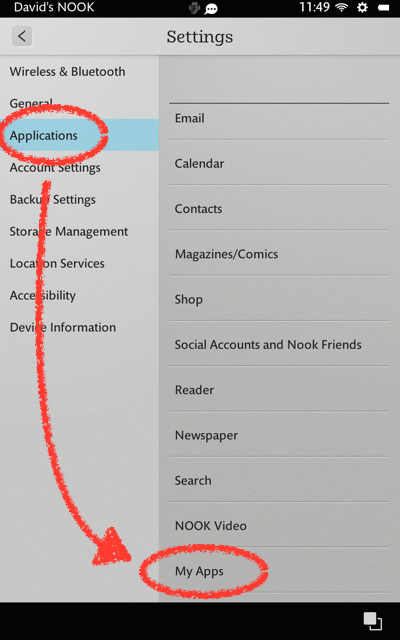 Select Applications from the left hand side, and then My Apps on the right - you might need to drag the list upwards to see the My Apps option.

This will open up a new list of all of the applications (games and everything else) you have on your NOOK.

Scroll down until you find the game that isn't working  (in our case, Wordsearch, but you will need to select the app you need!) 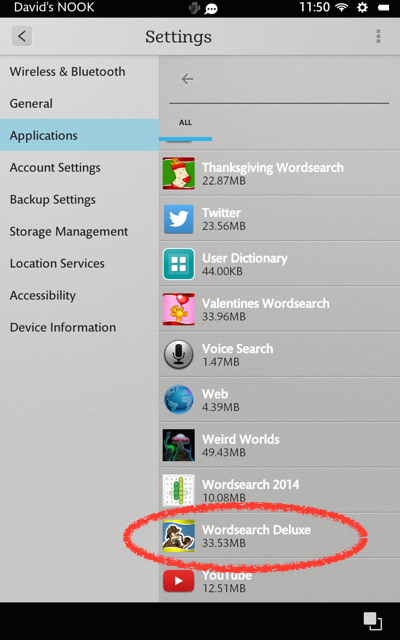 Tap on the icon for the app in question, and it will bring up a new page with some options 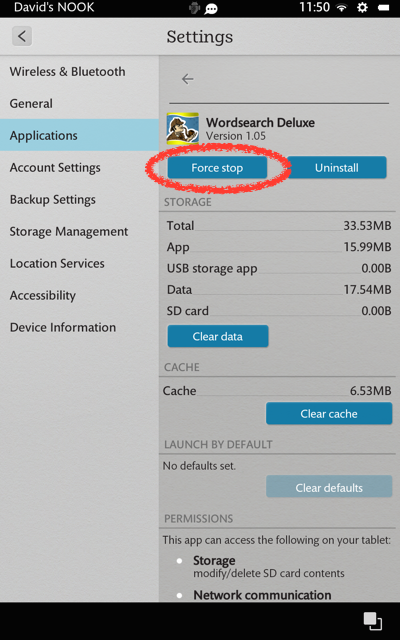 The one to try is Force Stop.  This will close down the game if it is running in the background.

It will give you a warning before continuing like this : 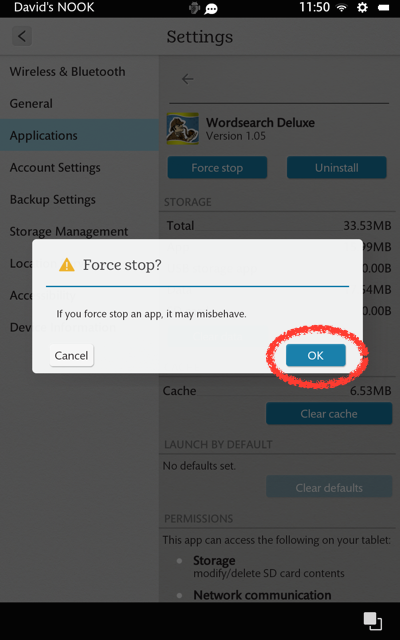 At this point, just to make sure the NOOK has not got anything else running in the memory that could cause problems, it is worthwhile Powering Down and Back On -

To do this : Press and hold the Power Button on the side of your Nook for about five seconds, and then choose 'OK'.  The screen will then go dark.  After about 10 seconds you can power it back on by holding in the power button for about three seconds again. It will take the Nook about a minute to go through it's usual boot-up sequence, after which it will be ready to use again.

Then you can then unlock the screen and use the NOOK home button to return to your home screen as usual, and then try running the game again.

It may give you the option to try a Continue again - it is worth trying this as it will give the best chance of keeping the game data.

If the continue doesn't work this time, then it means there is likely something wrong with saved data for the game, and it is unable to restart.

This sometimes happens if the data is corrupted (the device powered off or was interrupted while exiting the game the last time), and although it's rare, does mean that the game can't recover successfully.

Restoring the defaults means that it will ignore the saved data entirely, and restart using the built-in default settings.

You will lose any game in progress, and any game settings (possibly including statistics and achievements in some games), but this will be very likely to fix the problem.

The next thing to try is removing the saved data for the game.  This doesn't remove the game itself, just its saved settings file and any other items it may have created (such as a temporary dictionary table, or a saved image, depending on the game.)

Go through the Settings app again, but 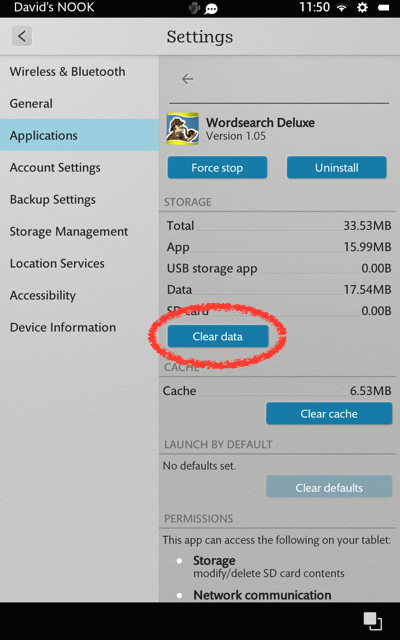 Again it will warn you first: 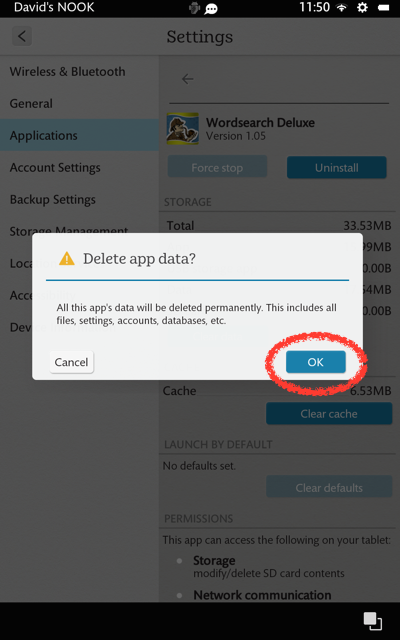 After doing this, the game should be able to run fine, so try again from the apps screen as usual.

6 : If all else fails, Redownload the game  (Move to NOOK Cloud)

If clearing the App data hasn't worked, then the most likely remaining explanation is that game itself has been corrupted in memory. This is very rare, but not impossible as the devices get a lot of use, and especially as they get older the data can be a bit more prone to corruption.

To fully replace the game with a new copy, the easiest way is to ask the Nook to move it to the cloud, which means removing it from the device, but still keeping it available in your Nook account.

Find the game on the Apps screen, and then Tap and Hold it for a few seconds. 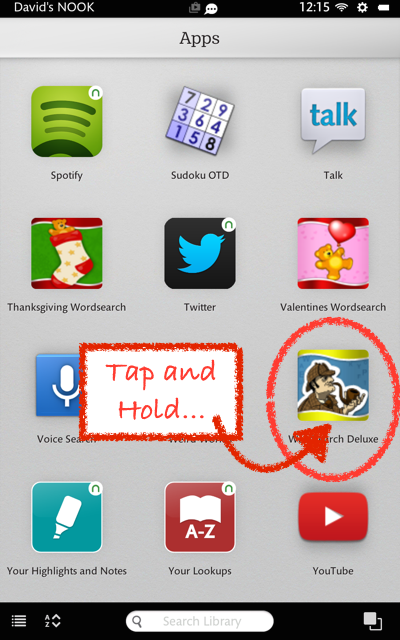 It will pop up some options for you; 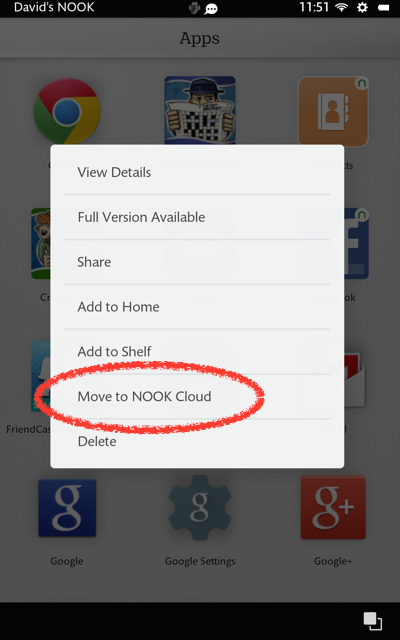 Select Move to NOOK Cloud, and after a confirmation, the icon will change to having a small cloud in the corner.

Tap on the game icon again, and it will download a fresh new copy from the Barnes & Noble server, and install it onto your NOOK.

Once the download is complete, you should be able to tap it and start the game normally!

If it worked - please select Like at the bottom of this article to show us that it helped you!

If it didn't work, please contact us for further assistance, and let us know which game you are using, which model of NOOK you have, and which of the steps above you tried, so that we can help further if possible!

For problems to do with things like purchasing or getting the app downloaded, it's also worth checking the NOOK support pages, just select the Frequently Asked Questions section for your device on this page : Barnes & Noble NOOK Support page

H
Howard is the author of this solution article.

Did you find it helpful? Yes No

Send feedback
Sorry we couldn't be helpful. Help us improve this article with your feedback.